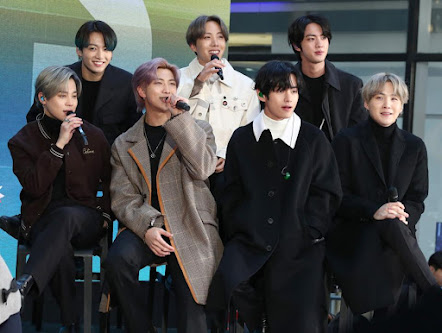 If that looks like an abrupt thanks to start a piece of writing, then it matches how the Recording Academy unceremoniously dispensed with the most effective Pop Duo/Group Performance award, that BTS’s “Dynamite” was nominated, early within the evening. Before the telecast even started, Lady Gaga and Ariana Grande’s “Rain on Me” snagged the trophy, beating the Korean pop septet’s record-breaking hit. But that didn’t stop the Grammys from relentlessly hyping BTS’s live performance all night in a very desperate bid to stay viewers tuned into the show.

Viewers griped on social media about the Grammys incessantly teasing the Korean pop septet’s performance, with many joking that the show was holding BTS and their fans hostage. it absolutely was a shameless and apparently unsuccessful attempt at ratings bait, as Variety reports that last night’s ceremony averaged an abysmal 8.8 million viewers, far and away the least-watched telecast in Grammy history. it absolutely was a disappointing but predictable end to BTS’s 2021 Grammys saga, which yet again found the Recording Academy doing the bare minimum for the most important ensemble within the world.

Who actually won the simplest Pop Duo/Group Performance award last night is fairly inconsequential—“Rain on Me” is an infectious, chart-topping dance-pop anthem that made for a legitimate contender by Recording Academy standards. i'd have preferred to work out “Dynamite” make the prize, but it makes perfect sense why “Rain on Me” triumphed. the important problem began the instant the Recording Academy announced this year’s nominees.

The momentousness of BTS earning their first Grammy nod this year was tainted slightly by the nagging sensation that the Recording Academy only nominated “Dynamite” as a conciliatory gesture to placate fans. It’s no surprise that BTS’s first nomination visited their most palatable song for casual Western listeners: a disco-pop anthem performed entirely in English that was engineered for mass consumption via streaming, radio play and TikTok dance challenges. “Dynamite” is an irresistibly catchy song and landmark achievement for BTS, but advisedly, it lacks the disarming vulnerability and musical nuance of their best work.

And they released lots of top-tier add 2020: two No. 1 albums, Map of the Soul: 7 and BE, and their accompanying singles, including the haunting emo-trap opus “Black Swan,” the multilayered arena-rap anthem “ON,” and also the uplifting pandemic ballad “Life Goes On.” BTS’s staggering 2020 output saw the group at the height of their creative powers and commercial dominance, and that they would have made legitimate contenders for any of the main Grammy categories, including Album of the Year, Record of the Year, Song of the Year or Best Pop Vocal Album. Instead, the Recording Academy nominated BTS’s least adventurous song in an exceedingly relatively minor category, as if to mention to their fans, “Fine, we’ve heard your complaints and we’ll offer you what you wish, now will you please shut up about BTS?”

This also comes as little surprise, given the Grammys’ historically tenuous relationship with race. Since 1959, only 10 Black artists have won the Album of the Year award, while non-white artists are often relegated to genre-specific categories or tossed into the all-genre category as if to meet as diversity quota. BTS’s odds of winning last night were always slim, as i believe they and plenty of of their fans understood. But giving the most effective Pop Duo/Group Performance to a different nominee while relentlessly hyping BTS’s performance made their loss feel especially sleazy, as if the Recording Academy knew from day one that it had no intention of giving BTS the win—but hey, it'd still milk their appearance for ratings, and that they should feel honored to even be invited to perform on the (virtual) Grammys stage.

BTS, as always, accepted their loss with class and went on to deliver another spellbinding performance that ended with them on a rooftop with a stunning shot of the Seoul, Asian nation skyline behind them. They made the foremost of the chance to perform on the Grammys and once more proved that they’re a number of the hardest-working and most charismatic performers within the business. Not that their star power was up for debate, seeing as last October’s “Map of the Soul ON:E” virtual concerts brought in nearly 1 million paid viewers from 191 countries and regions round the world. (Quick rhetorical question: does one think 1 million people would lot $50 to $100 to observe the Grammys?)

Progress within the music industry happens at a glacial pace, if it happens in the least. One can hope that BTS will still receive more high-profile Grammy nominations—and wins—after getting their foot within the door this year. it might certainly behoove the Recording Academy, which has been recently affected by boycotts and accusations of bribery from several high-profile musicians, to acknowledge BTS more, if only to avoid wasting face and slow its own death march into irrelevance. But if that doesn’t happen, neither BTS nor their fans should lose lodge it. It’s only the Grammys’ loss
Posted by mahendrajingga at 6:43 AM